A regular AR-15 fires, ejects, and chambers rounds using either a direct-impingement or piston-operated gas recoil system. That's a mouthful, let's just call it a gas system either way. Just like the AR-15 comes in a plethora of calibers and configuration, so too does its gas system. There is no real, "universal" logic for picking the right gas setup for your black rifle, SBR, or pistol. Today, we're going to explain it all, so you save the knowledge for yourself! Let's get started.

This is a sub-guide to our Complete Parts Guide on Building an AR-15.

How does the AR-15's gas system work?

The gas-recoil functionality of any firearm is designed to replace the need to have a manual bolt. A direct-impingement system interacts directly with the bolt carrier group (BCG) to automatically cycle the bolt back and forth with every trigger pull, allowing for semiautomatic fire. Here's the full, step-by-step explanation of how the AR-15's direct-impingement gas system cycles rounds.

First, the hammer strikes the primer on the round being fired in the chamber. This strike ignites the powder in the shell casing, causing an explosive release of heat and pressure. All that heat and pressure creates a ton of hot gas. That gas forces the bullet down the bore at a few thousand feet per second, firing it. Behind it, all that excess gas comes a-flyin', carrying a bunch of energy. All that energy's perfect for harnessing it and using it to cycle rounds. A gas block is installed on the barrel. The block traps some of that excess gas and sends it through a small port, then into a gas tube on top of the barrel, and back into the upper receiver. Inside the upper receiver, the gas tube forces all that gas into a key screwed atop the bolt carrier group.

The gas expands inside the BCG, forcing it backwards into the buffer tube. As the BCG rides backwards, an extractor pulls out the spent shell casing to make room for a new round. The spring and buffer inside the buffer tube compress and rapidly expand, driving the bolt carrier group back into the upper receiver. As the BCG rides forward, it grabs a new round from the magazine and chambers it, making it ready to fire. Rinse, and repeat.

If you were shooting a bolt gun or single-shot rifle, you'd be pulling on the bolt's lever or charging handle manually to perform those last two actions. That's the beauty of the AR-15's gas system. But making it work requires the right configuration.

The length of your AR-15's gas system is calculated by measuring the distance from the gas block port on the barrel to the chamber inside the upper receiver. This length will determine how much recoil energy is harnessed to cycle the bolt carrier group correctly. Too much gas, and your AR-15 will become over-pressurized. This dramatically increases felt recoil and it takes a toll on your barrel, gas system, BCG, buffer, and upper receiver. Too little gas, and you'll run into all sorts of issues: Stove-pipes, failures to eject, failures to feed, frequent jamming, and more. Basically, you need to find the Goldilocks Zone: Your gas system needs enough energy to fully cycle the bolt, but it can't have so much energy behind it that it makes your rifle or pistol feel like it's gonna blow.

Picking the correct gas length for your AR-15's barrel is simple. There are four types of direct-impingement gas systems to pick from: Pistol, Carbine, Mid-length, and Rifle.

Other Things that Affect Gas

Type of Ammo. Differences in bullet weight (grain count) and the amount of powder in a cartridge will affect how much energy your gas system can capture. Some AR's are configured to shoot subsonic rounds with a suppressor. These low-power rounds purposefully use less powder, so they don't achieve supersonic speeds.

Adjustable Gas Blocks. To accommodate factors like ammo type, adjustable gas blocks have come onto the market. These adjustable blocks allow you to fine-tune how much gas is captured and sent into the BCG. Adjustable blocks usually go together with rifles or pistols that are configured for shooting both supersonic and subsonic loads (like 300 Blackout).

Direct impingement is just one way the AR-15 can use gas to cycle the bolt carrier group, and it has its own drawbacks. Direct-impingement systems force hot gas directly into the BCG and upper receiver. Unfortunately, this causes a lot of carbon fouling, oil, and grime to build up inside your rifle or pistol. Direct-impingement systems require frequent cleaning to remain reliable. There is an alternative for the shooter who wants "the best of the best ", and that's the piston system.

The AR-15's piston system still operates by capturing hot gas escaping the barrel, but it doesn't send all that mess down a gas tube, gunking up your receiver and internals. Instead, all that gas is captured inside a piston that's installed inside its own tube. The piston then contacts the BCG and forces it backwards, cycling a round. Other piston systems replace the traditional bolt carrier group completely.

Advantages of using a piston system

The piston system offers some advantages over direct impingement. Keep in mind that piston systems are more expensive, complex, and heavier:

Look carefully at the animation above. You'll note this rifle operates with a regular bolt carrier group and typical Picatinny handguard. Piston systems are designed to be drop-in upgrades for most AR-15s. Take a second look and you'll see the modified gas key on top of the BCG. It's re-designed to interface with the head of the piston, instead of a gas tube.

Lastly, you may notice some gas being ejected from an opening on the gas port, away from the shooter. This is evidence of adjusting the gas port to achieve just the right amount of energy. Excess gas is then diverted away from the bolt carrier group and receiver, instead of fouling it up. This adjustability is convenient for switching between super and subsonic rounds.

Even with good ole' direct impingement, you can still customize and modify your gas system so it operates as smoothly and efficiently as possible. Doing so requires investing in the right gas block. There are a few types available on the market: 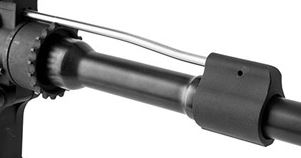 This is the old-school gas block found on most original AR-15s, M4s, and M16s. The gas block combines with the front sight post, offering a sort of two-for-one deal. There aren't many advantages in using a front sight post-gas block combo, save for turning your barrel into a pointy Billy club if you run dry on ammo. Many shooters still prefer this gas block because of its classic look and feel. It's a popular setup for service rifle clones. 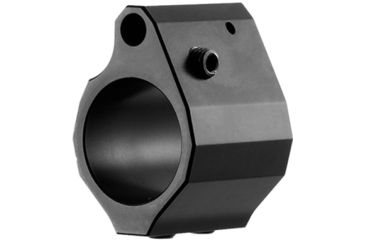 This little unit looks deceptively simple, almost like a low-profile block. This, however, is a fully-adjustable gas block, designed for tuning a rifle to get that perfect balance of recoil and reliability. Other shooters use these adjustable blocks to quickly and easily switch between supersonic and subsonic loads. You'll find adjustable blocks like these installed on a lot of AR-15 pistols, as well as pistols and rifles chambered in .300 Blackout. The small screw on the side is the adjustment screw. Tightening or loosening this set screw will adjust how much gas is captured by the block.