Building your first black rifle? In this guide, we're breaking down AR-15 triggers from start to finish. We'll explain how the standard trigger works, what types of triggers you can buy or upgrade with, and which is best for your own build's needs. Lastly, we'll go over how to troubleshoot your trigger assembly, including how to fix the dreaded AR-15 trigger reset failure that so many shooters deal with. Let's get started.

This piece is part of our Complete Parts Guide on Building an AR-15.

How the AR-15 Trigger Works

First, let's look at the original AR-15 trigger, identify its main components, and what they each do in order of operation. The trigger we're demonstrating below is a typical mil-spec, single-stage trigger currently at rest with the hammer cocked: 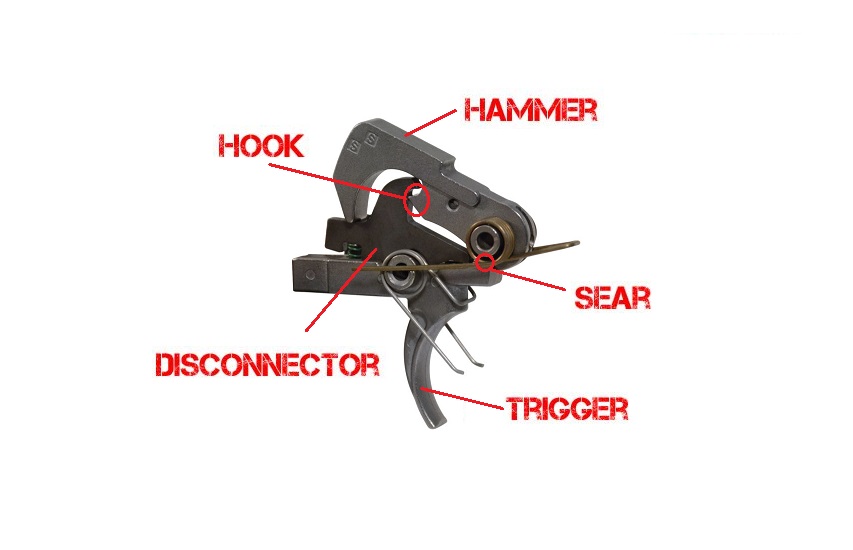 Trigger. The trigger is your "go" button. Pull it and your rifle or pistol will release the hammer, allowing it to fire a round if one's in the chamber. 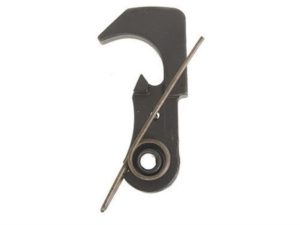 Hammer. The hammer is the large, flat-faced piece of steel at the top of the trigger assembly. The hammer rotates up and down like a large lever. The face of the hammer strikes the firing pin inside the bolt carrier group, igniting the primer on a chambered round. 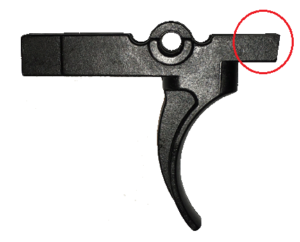 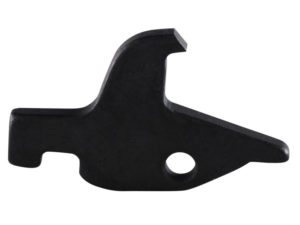 Disconnector. When a round is fired, the bolt carrier group is forced backwards into the buffer tube by the gas system. As the BCG rides backwards, it pushes the hammer back down into the trigger assembly. This is how the hammer gets back into position to be re-cocked for the next round.

The sear normally holds the hammer down when cocked. But since you pulled the trigger to fire a round, it's not in the right place at the right time. And no human shooter could release the trigger fast enough to get the sear in position before the hammer is forced back down by the BCG. So, to prevent the hammer from just de-cocking and flying back up on its own accord, the spring-loaded disconnector catches the hammer for you. 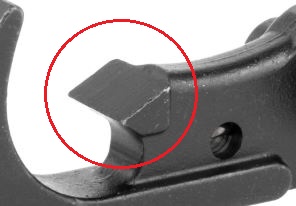 Hook. When the hammer is forced down by the BCG, the hook on the back of hammer temporarily catches the disconnector, preventing it from flying back up. As you release the trigger and allow it to return to its resting position, the sear moves back up to meet and cock the hammer. As the sear moves back into position, the disconnector slides off the hook. At this point, the hammer is now held by the sear and cocked, the trigger itself is reset, and you're ready to fire once again.

Before we start discussing trigger types and what's best for you, it's important to learn some jargon. These are the things you should look out for when shopping for a trigger, doing research, or reading customer reviews:

Take-up refers to the slack you might feel when you start pulling on a trigger. A trigger exhibits some slack if you can pull on it and it starts moving before the sear begins moving away from the hammer. Basically, you're squeezing the trigger and nothing is happening yet.

The wall. If a trigger has any slack, the wall is the point at which slack is taken up and the sear begins moving away from the hammer with movement of the trigger itself. You'll know you've hit "the wall" when you begin to feel spring tension and resistance, and movement of the sear.

Creep is the movement of the trigger and sear up to the point of the hammer breaking loose and firing. Creep is often talked about negatively but it's not always a bad thing. If your trigger's creep is smooth and consistent, you'll have a predictable gun that'll let you master a good trigger squeeze. You could, however, feel a series of stops and starts while the trigger creeps. This is referred to as trigger stacking.

Stacking occurs when friction or resistance stops the trigger from creeping, requiring you to exert more force to make it move again. Stacking creates an unpredictable trigger pull and is something to be avoided.

Pre-travel is simply the combination of take-up, the wall, and creep. Pre-travel can be described as a measurement ("my trigger has around 1/8" of pre-travel").

Trigger break is the point at which the sear disconnects and the hammer snaps up, striking the firing pin.

Over-travel is the distance the trigger continues to travel after it breaks. More over-travel means trigger reset takes longer.

The semi-auto function of the AR-15 is relatively simple, and it's allowed aftermarket trigger kits to flourish. Nowadays, there's a trigger out there for every type of shooter and budget. 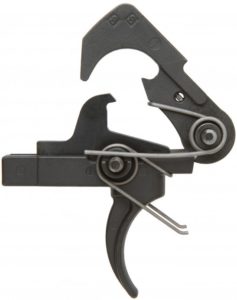 This is the O.G. trigger that Eugene Stoner designed. It's also the trigger you get with any standard lower parts kit. The single-stage trigger looks and functions exactly like what's described above. Almost every single service rifle and store-bought AR-15 uses a regular ole' single-stage trigger. Because of their simplicity, single-stage triggers are reliable and exhibit little to no take-up. Creep is minimal and consistent, and stacking is rarely an issue.

Most single-stage triggers are based on the M16's design. Military brass thought a light trigger pull (4 to 5 lbs.) would be dangerous, so most have a pull weight of 7 to 8.5 lbs. The latter is considered a mil-spec trigger weight. 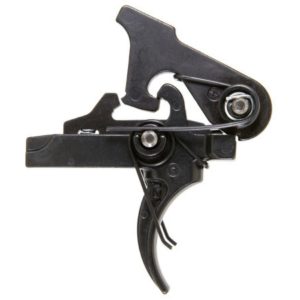 A heavy trigger can make achieving consistent accuracy a challenge. The more force you have to exert on the trigger, the more likely you are to pull your shots left or right and miss. But having an incredibly light trigger pull can be dangerous, so what's the solution? The two-stage trigger. A two-stage trigger feels like it has a little slack build in. Really, this is simply a custom disconnector and hammer with two hooks. Exampled above is a Geissele Two-Stage. The double disconnector hooks act as two points of contact before the hammer is released.

The slack you feel when you squeeze the trigger partially is an initial take-up, usually around 1.5 to 2 pounds. This disconnects the first of two hooks. Once slack is taken up, the trigger presents a slightly heavier "wall" (second disconnector hook) that breaks at around 2 to 2.5 pounds. At this point, you only need a tiny extra squeeze to break the hammer and take your shot. Two-stage triggers are great because they offer a sort of buffer zone. You can safely move your rifle around without fear of setting it off. But when the time comes, you have a predictable trigger squeeze that doesn't require much creep or force to break. 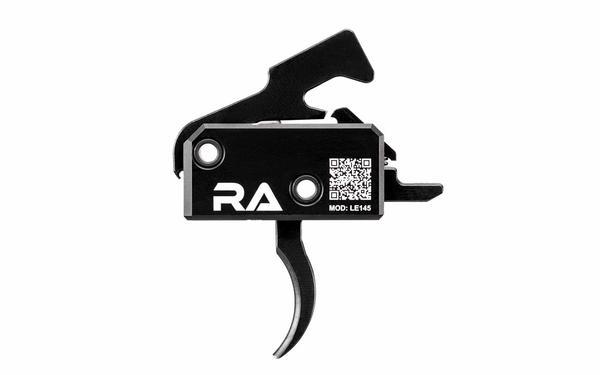 Drop-in triggers are hugely popular among many AR-15 owners. They're the easiest type of trigger to install, and they can be used in any rifle or pistol equipped with a standard lower parts kit. Drop-in triggers are self-contained units that include a custom trigger, sear, hammer, and springs. As the name implies, these units are pre-assembled and simply "drop in" to the lower receiver. This eliminates compatibility issues and the need for troubleshooting. Exampled is the LE145 Drop-in Trigger from Rise Armament.

To give you an example of just how good a drop-in fun button can be, the LE145 has a final tolerance of 0.000001 inches (that's one-millionth of an inch). The result is a trigger with no creep, take-up, stacking issues, or over-travel. For an easy trigger upgrade that's guaranteed to work, this is what we recommend above all else.

Some use their own pins, while others simply reuse the pins that came with your parts kit. Drop-in triggers can be binary, two-stage, or single. Some are adjustable, but only partially. These triggers are usually "tuned" at the factory, though some allow you to select pre-determined trigger weights by rotating a screw or spring.

The black rifle market's flooded with tons of triggers and parts kits. With so many different brands and parts available, even a regular single-stage trigger can run into functionality issues. The most common issue shooters run into is the dreaded failure to reset. To confirm that you have a failure to reset, you need to perform a basic functions check:

If you don't hear a "pop" or the hammer doesn't fall a second time (the final trigger squeeze in the animation above), you have a failure to reset.

Don't pull your hair out just yet. Plenty of shooters have dealt with this issue. There are some quick ways to diagnose and fix a failure to reset: 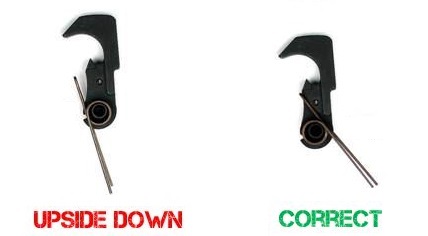 Check hammer and trigger springs. The hammer and trigger springs are directional and occasionally, they may be installed upside down. Check both springs to see if the coils are above the springs' legs, or below. The legs of both springs should be resting flat on the floor of the lower receiver. This gives preload to the coils, allowing them to control trigger and hammer tension.

CAUTION: Excessive polishing can round out the faces and edges of the disconnector and hammer. If this happens, it can cause your trigger assembly to fail completely. Take your time polishing. Check the hammer reset functionality while you polish and test-fire a few rounds if possible. Stop sanding once the disconnector and hammer start to cleanly separate. There is always a break-in period with new firearms, so we recommend putting at least 100 to 200 rounds through your new AR-15 to help work out any kinks. 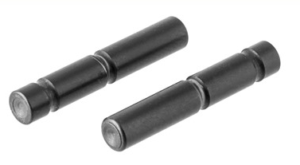 De-burr hammer and trigger pins. Burrs can also be present on your trigger and hammer pins. These pins need smooth surfaces to allow the hammer, trigger, and disconnector to rotate freely. With the receiver open and your thumb on the hammer, press it down to cock it and then squeeze the trigger. With your thumb still on the hammer, allow it to slowly rotate up and then press it back down, slowly. If you feel resistance or binding at any point, there are burrs on your pins. 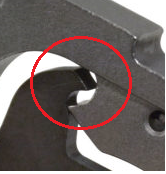 Whether you're buying or building your AR for the first time, or simply trying to upgrade with the right parts, this guide should offer everything you need to know about AR-15 triggers. If you need more help picking out parts, you're troubleshooting a trigger job, or you simply have more questions, give us a call or email us! We build our own rifles and pistols in our spare time and we're happy to help you set up your own."