"Isn't mil-spec better than commercial? I want what the military uses!" That's a question and a statement often made by so many black rifle builders and shooters. This quick lil' guide explains the similarities and differences between mil-spec and commercial AR-15 buffer tubes.

If you're a first-time builder shopping around for the parts you need to finish your rifle or pistol build, you've probably come across a myriad of buffer tubes that talk about "mil-spec" and "commercial" diameters and such. 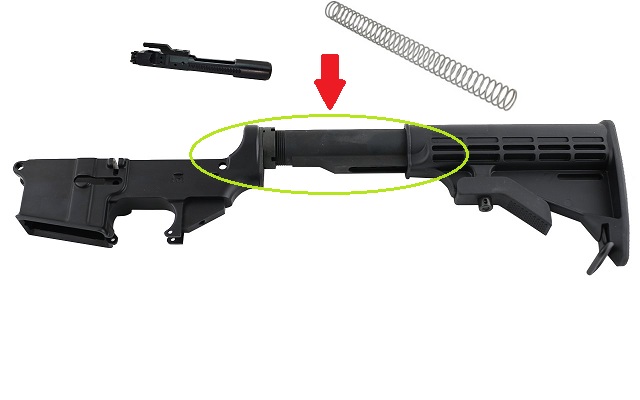 Officially called a receiver extension, the buffer tube is the cylindrical aluminum housing that contains your AR-15's buffer and recoil spring. It also acts as the mounting point for your buttstock or pistol brace.

The only physical difference between a mil-spec and commercial buffer tube is the external diameter of the stock-end of the tube itself. Importantly, this diameter will determine what type of buttstock your purchase. If you already own a black rifle or pistol, this outer diameter (OD) will dictate what type of buffer tube you purchase.

Mil-spec buffer tubes have a 1.14" outer diameter at the buttstock end. At the receiver end, outer diameter is 1.185", which includes the height of the threads.

Why do Commercial Buffer Tubes Exist?

To put it simply, mil-spec buffer tubes are more expensive to produce. Official "mil-spec" tubes are forged from 7075 T6 aluminum. That means the threads on the tube are rolled into the metal. This produces slightly taller, stronger threads.

Which Buffer Tube Should I Buy? Is One Better or Worse?

There is no evidence to suggest a mil-spec buffer tube is noticeably stronger or more capable than a commercial tube. When appropriately torqued to spec and secured with Loctite, either tube will perform admirably in any conditions.

With that said, we still recommend investing in a mil-spec setup over a commercial tube.

The reasoning is simple:

When a retailer, gunsmith, or tactical rifle company produces AR-15 parts, they almost always make those parts in a "mil-spec" configuration. This allows sellers the opportunity to offer their products and accessories (like buffers, buttstocks, and sling attachments) to law enforcement and Department of Defense agencies. Those agencies often use mil-spec rifles purchased by manufacturers who make arms and munitions for the government. Since the AR-15 pays homage to the service-issued M4 and M16, the civilian market often follows suit.

Basically, mil-spec tubes are considered the "standard" across the AR-15 market. That standard is becoming more and more accepted as new parts and manufacturers come to the scene each year.

Can a commercial tube work with a mil-spec buttstock and lower?

Lastly, a commercial castle nut and end plate will likely not fit onto a mil-spec buffer tube to secure it to your upper receiver.

What about the bolt carrier group, buffer and spring?

Luckily, commercial and mil-spec tubes use the same innards. That means you can get away with any BCG, buffer, and spring that suits your rifle or pistol configuration. These tiny differences in dimensions that we've looked at aren't enough to cause any issues with your AR's functionality when it comes to the bolt carrier group and cycling rounds. That means you can get away with using a full-auto M16 BCG, which is favored by most shooters.

As always, here's the short-n'-sweet: